This Hajj disaster is really getting under my skin. Despite the fact that at least 362 people have died, at 11:45 this morning the New York Times didn’t even have it listed on its homepage, and CNN had a headline listed next to other important news such as “Best man toasts groom, then his house,” “David Hasselhoff files for divorce,” and “Apple in the driver’s seat.”

Readers of this blog know that I’m irked by the media’s love affair with Apple. And after this week’s Macworld expo, in which Steve “good products equals social change” Jobs announced more toys, we have been treated to yet another barrage of “articles” about Apple’s new goods. I understand why this happens; promoting Apple means promoting a safe-seeming commercialism that gets people to read your magazine or web site, and since these articles are little more than rewrites of press releases, it’s an amazingly cheap way to generate content. 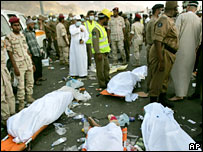 Maybe I’m constantly hoping for more from such a corrupt industry, but I thought this Hajj tragedy would have generated more of an outcry. The BBC, of course, is paying attention, but it actually sees the world not as an outgrowth of American industry, but as a collection of distinct cultures.

Our government is unwilling to criticize Saudi Arabia lest our oil prices go up again, and the mainstream media follows suit. The Saudi authorities’ claim that “police could not have done more”rings pathetic; this is an annual pilgrimage made by millions of believers; couldn’t they prepare better? Somehow, tragedies within its borders are never the authorities’ fault. Hmm. This might explain why Georgie looks up to them so much.